AGIWiki/King's Quest: Quest for the Crown 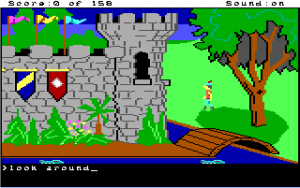 King's Quest: Quest for the Crown was created by Sierra On-Line co-founder Roberta Williams in 1984. It is set in the fictional kingdom of Daventry, and follows the story of Sir Graham, who will be made king if he can complete a quest to find the three lost artifacts which will restore peace and prosperity to the kingdom.

There are three versions of the game, two made with the AGI engine: the original release and a later release with support for the EGA adapter, and an enhanced remake made with the SCI engine.