The original Freescape was one of the first 3D game engines, developed by Incentive Software for the game Driller in 1987 and following games, culminating in an easy to use game editor called 3D Construction Kit 2.0 in 1992, which was used to make a few amateur games.

Our freescape reimplementation aims to emulate the original one, with the following improvements:

The new ScummVM renderers remove completely the artifacts of the original freescape engine, since they perform computation on floats instead of integers.

How to switch different renderers

The most prominent feature of the ScummVM reimplementation is the use of different renderers such as TinyGL or OpenGL. These can be selected changing the option in "Game 3D Renderer" either in the "Global Options..." (for all games) or the "Game Options.." for the Freescape games. So far, the available implementations are "OpenGL" or "Software". By default, the game will render in Software mode. 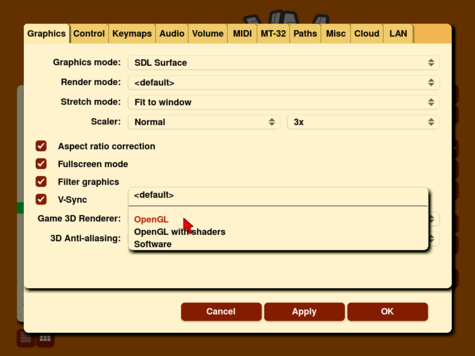 The Freescape technology evolved from 1987 to 1992. Our engine will progress supporting the following games/releases:

Re-implementing the 3D Construction Kit itself (the program used to create games) is outside the scope of this project. ScummVM will only allow to play games already released, not create new ones.

The reverse engineering of the original engine and code development took several decades (!) and includes the following people:

The ScummVM reimplementation of Freescape will feature a number of generic cheats that will be implemented for every supported game: